Where we are finding Citizen Science for DRR in action, along with past projects and citizen science initiatives. Click on a highlighted country to learn more.

Select a light blue country above to learn more about selected citizen science projects  aimed at disaster risk reduction in those countries.

With its reputation for rain, there are several examples of more interactive activities to help manage and mitigate seasonal flooding with affected communities.

Learn more about citizen science for DRR projects focused in the UK.

The U.S.A. has the full complement of natural hazards. The range of initiatives have responded to past events and anticipate future hazards.

For example, the United States Geological Survey has a wide range of programs, and has conducted many analyses of their impact.

Learn more about citizen science for DRR projects focused on the U.S.A

Learn more about citizen science for DRR projects focused on the Philippines.

Indonesia is one of the most hazard prone countries in the world.

It has a tropical climate, the 3rd highest density of volcanoes in the world (boasting some of the best known and most violent) and has a long history of earthquakes and tsunami too.

No surprise then that there are several initiatives involving a variety of different techniques to involve citizen in taking control of their risk.

Ecuador has risk from earthquakes, landslides, volcanoes, intense rainfall and other hazards.

There was a pioneering response to the long-lived eruption of Tungurahua volcano which you can read about here.

Flash-flooding is the subject of the ‘FloodChaser’ Project which is also based in France and New Zealand.

Our project partners at SRC have a citizen science project here monitoring gases from the famous Soufriere.

There has also been work to map slope failure (landslides) collaboratively. The link here provides an overview of that work, and links to further papers.

One of our sister ESRC NERC AHRC ‘Building Resilience’ GCRF projects has initiated a citizen science project around Masaya volcano in Nicaragua. They are monitoring the environmental pollution associated with the volcano. This is their website.

The seond relates to a ‘community task force’ engaging with landslide management: a useful example of the broadening of knowledge around risk and citizen science.

An examination of the value of community-based risk assessment in anticipating the impacts of future hazards.

There are several examples of citizen science in Australia, focussed around crowdsourcing or participatory approaches to bushfire preparedness, and hydro-meteorological hazards.

A fascinating exploration of Maoist ‘mass science’ in the context of earthquake detection and the integration of lay knowledge.

St. Vincent is a Small Island Developing State with a powerful volcanic history. The magnificent Soufriere Volcano dominates the northern portion of the island and has erupted in three times in the last 150 years (1902-03, 1971-72 and 1979).

It’s not just about the volcanic hazards however, our existing collaborative research had shown that for Vincentians hazards also mean hurricanes, floods, intense rainfall and sometimes even drought.

Working with our existing project partners (University of the West Indies Seismic Research Centre [SRC], and the St. Vincent National Emergency Management Organisation [NEMO]))  we wanted to use St. Vincent to trial our new ideas about citizen science and in October 2017 ran a series of workshops in communities around the volcano. Watch this space for new data coming from this project! The work we did here will fit into a new Caribbean Development Bank project led by SRC, developing community-based disaster risk reduction.

Landslides are a common hazard in Nepal and the wider Himalayan Region, posing a direct threat to people, property and livelihoods. Landslides typically occur during the annual summer monsoon and are a challenging hazard to address as they occur throughout the landscape. Most landslides are impossible to prevent or stop. Common approaches such as the construction of gabions, retaining walls and bioengineering can be of limited use.  Landslide early warning systems, which are often based on measuring rainfall intensity and duration, are also inherently unreliable due to the complex nature of landslide hazard. Understanding the landslide risk faced and, where possible, reducing exposure, is therefore commonly the best and most viable approach to reducing landslide risk.

As part of the citizen science project, we worked with the INGO Mission East who were engaged in an ECHO-funded project ‘Promoting inclusive community-based disaster preparedness in earthquake affected areas of Nepal’.  The communities they were working with in Ramechhap and Okhaldunga Districts in Central Nepal were impacted by the 2015 earthquake and perennial earthquake and rainfall-triggered landslides. Drawing on our learning from the Earthquakes without Frontiers (EwF) project and a DFID-funded project on post-earthquake landslide monitoring and risk reduction – which included the establishment of low-tech slope monitoring with a community in Eastern Nepal, and the monitoring of cracks in the ground following the 2015 earthquake in Central Nepal – we worked with Mission East, and their local implementing partner, Community Development Society (CDS), to support the landslide risk reduction activities in the case study communities. We piloted and refined a toolkit to support community-based landslide risk reduction which recognises and values local knowledge and supports communities to capture simple data about landslides which can inform their land use planning, as well as be used in advocacy with local government.  We have been working with an illustrator to develop some materials to explore innovative ways to communicate key information about landslides to government and NGO stakeholders, and communities, for more effective community-based landslide risk reduction in Nepal.

Previous research projects (STREVA) have focussed on the drivers behind the citizen science network created in response to the eruption of Tungurahua Volcano (the ‘vigias’).

Working with our partner, IGEPN, our fieldwork in Ecuador has focussed on understanding the benefits and challenges  the vigias have had in their work as ‘watchers of the volcano’. From new opportunities to  new knowledge and the difficulties they encountered along the way.

We also want to understand the way in which this successful network might be applied on other volcanoes and in other hazard contexts. 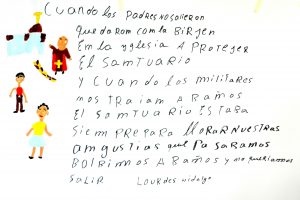